Many thanks to the Wall Street Journal for the excellent research and writing.  This article is an excerpt from the article posted on their platform on July 11, 2022 at 5:30 AM.

Of more than nine million calls to the hotline from 2016 to 2021, 1.5 million were abandoned before they were answered. 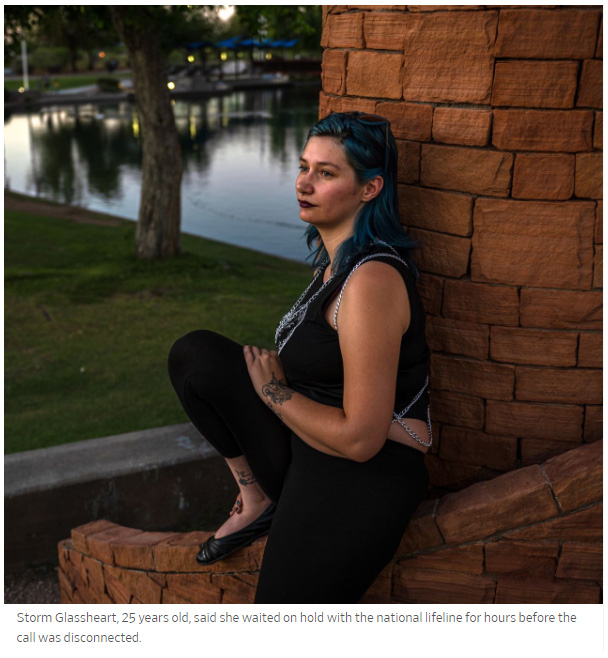 Health officials preparing to broaden the reach of a national mental-health crisis line are working to strengthen an overstretched network of call centers that didn’t connect with about one in six callers in recent years, a Wall Street Journal data review showed.

The National Suicide Prevention Lifeline will transition on July 16 to a three-digit number for calls and texts, 988, from a 10-digit number that has operated since 2005 in coordination with local crisis centers. The line’s operators, including the Substance Abuse and Mental Health Services Administration and the nonprofit Vibrant Emotional Health, said they expect an increase in calls to the shorter and more memorable 988 number during the next year. Stress, suffering and disruption of routines during the pandemic has worsened many people’s mental health, clinicians have said. 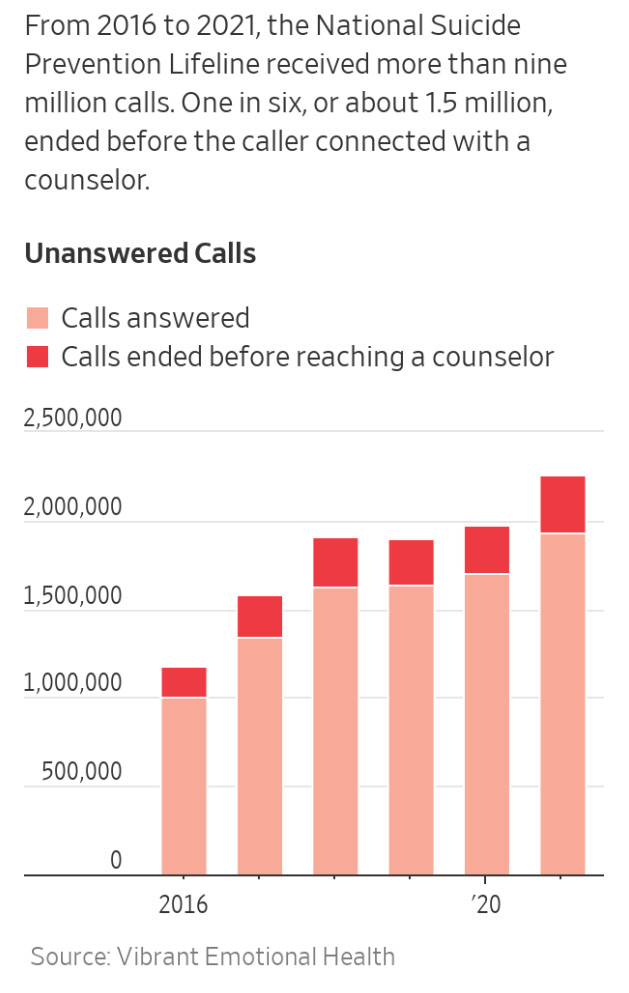 The network of about 200 call centers that answers calls to the line is already under some strain. Some 1.5 million of 9.2 million calls between 2016 and 2021 were abandoned by callers or disconnected before a counselor could respond, according to data provided by Vibrant and analyzed by the Journal. In 11 states, a majority of calls were routed to one of 13 national backup centers from local centers too overtaxed to answer.

Calls are first routed to local crisis centers based on area code and forwarded to national backup centers if no one is available. Answering locally is preferable, officials said.

“We have knowledge of who’s in the county, who might take their insurance, who isn’t taking new patients right now,” said Sam Johnson, director of behavioral health for the health department in Lake County, Ill., which runs a two-person call center.

Almost three in four calls in Illinois were routed out-of-state from 2016 to 2021, the highest of any state, the Vibrant data show. Nationally, just under 65% of calls to the crisis line were answered in-state in that period.

The Illinois Department of Human Services said a recently opened center will help answer more calls locally. Backed by federal and state funds, the center will have about 100 people answering calls from across the state in addition to centers that serve certain counties, said a department spokesman.

Nationally, some $432 million in federal funding and additional state funding to improve the crisis line will help to cut response times and answer more calls in-state after the 988 number goes live, public-health officials and mental-health advocates said. SAMHSA said that the crisis line was underfunded in the past and that recent investments have already improved wait times and the number of calls and texts answered.

“Is there readiness across the country for 988 to go live and provide the kind of response people want and deserve? No,” said Angela Kimball, an executive at Inseparable, a mental-health advocacy organization. “But are we making progress? Yes, we definitely are.” 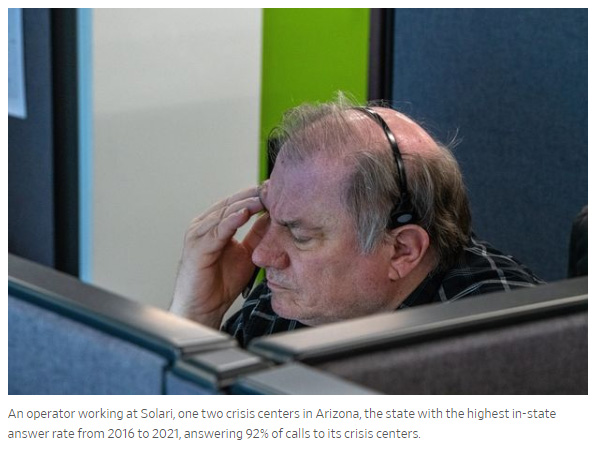 The suicide rate in the U.S. increased by 30% from 2000 to 2020, according to the Centers for Disease Control and Prevention. And while overall rates have declined from a 2018 peak, suicides among groups including children have risen in recent years, CDC data show. The crisis line has helped make people feel less suicidal and hopeless, some studies have suggested; some people said calling saved their life.

Annual call volumes to the current 10-digit line increased by 92% from 2016 to 2021. In Louisiana, the in-state answer rate of calls to the crisis line dropped to 47% in 2021 from 91% six years earlier. “Our call volume was so great that we had to back off a lot of our calls and send them back to the backup centers,” said LaVondra Dobbs, chief executive officer of VIA Link, a crisis center in Louisiana.

Storm Glassheart, 25 years old, said she called the national crisis line as a last resort in 2018 after trying two local crisis lines in Arizona. She said she waited on hold for hours. Then, she said, the call disconnected.

“I followed all the steps. Like, nothing is working,” Ms. Glassheart recalled thinking. “So that must mean that I should die.” She said she tried to kill herself and woke up the next day in a hospital after a friend found her passed out.

Arizona had the highest in-state answer rate from 2016 to 2021, answering 92% of calls to its crisis centers. Ms. Glassheart’s case appeared to be an anomaly, said Andrew Erwin, chief operating officer at Solari, one of the state’s two crisis centers. 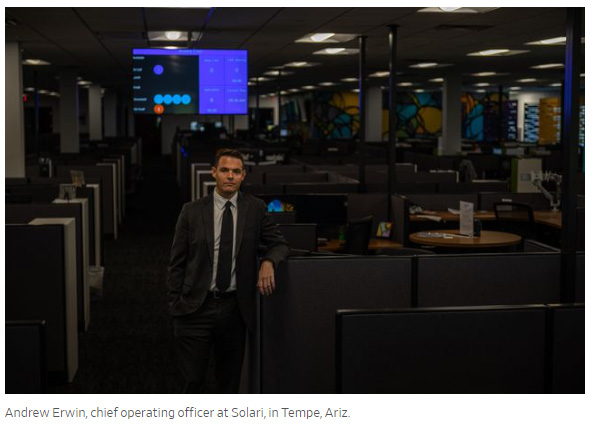 “I’ve never heard of anyone waiting that amount of time unless there was a technical problem within the system,” he said. “We want people to call in for anything and everything related to behavioral health, so that they know that there’s one line where they can get that support.”

About 80% of callers to the national crisis line who hang up do so after waiting two minutes or less, according to Vibrant, and the average speed of answer is 45 seconds. The centers and counselors do the best they can with limited resources, said John Draper, Vibrant’s vice president of national networks.

“We should see some differences in those numbers with more resources going forward,” Dr. Draper said.

Georgia has invested more than $20 million in preparation for the 988 launch, including staffing and technology to cut the time it takes to answer calls to the crisis line to fewer than 30 seconds, said Judy Fitzgerald, commissioner of the Georgia Department of Behavioral Health and Developmental Disabilities. “If people are in crisis, they need an answer pretty quickly,” Ms. Fitzgerald said.

The 10-digit number will remain active after 988 goes live, officials said. The Samaritans crisis center in Massachusetts is still looking to hire people to add to its existing 13 staff answering calls and some 240 volunteers. Recruiting and retaining staff can be a challenge, said Chief Clinical Officer Kacy Maitland. The center receives about 300 calls a day, and the highest need is between 11 p.m. and 3 a.m. A federal website maintains a searchable list of 988-related job openings and volunteer opportunities across the country. 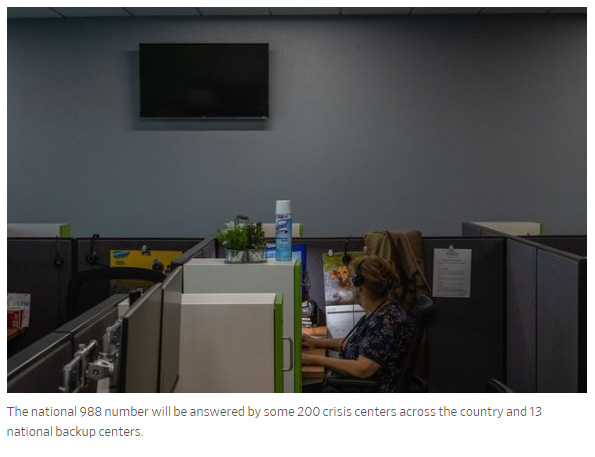 Many thanks to the Wall Street Journal for the excellent research and writing.  This article is an excerpt from the article posted on their platform on July 11, 2022 at 5:30 AM.